Her Sire Zapatero VDL is a successful KWPN Show Jumping Stallion who has competed with success to 1.50m International GP level as well as having great success in the Young Horse classes on his way through. His Sire Chin Chin competed at the Barcelona and Seoul Olympic Games, The World Championship in Stockholm as well as World Cup Finals and his Dam is the “Elite and Sport” mare Manieta who is by Ircolando the Sire of many international jumpers.

​Her Dam the Sports Performance Mare LV Balou Skye lightly competed under saddle to 1.20m SJ and 2* Eventing before heading to the broodmare paddock to improve the mare quality out there. She is by Balou Du Rouet who is the most successful son of the famous Olympic Champion and three time World Cup Winner Baloubet Du Rouet. Balou Du Rouet himself competed with plenty of success in Young Horse Classes and competed to 3* GP with Wins. Skye is then out of a Thoroughbred mare name Leica Chat who is by Chatham and out of an Omnicorp mare.

27/10/18 - Estimated to Mature 15.3hh. By Galaxy Spring Fever and out of Lilydale. Full Sibling to JL Ricotto who passed away. Bred thanks to the 10yr LFG Supplied by Galaxy Stud.

His Sire Galaxy Spring Fever is an excellent producer of performance ponies and comes from well known and proven lines with Galaxy Pourewa as a dad and Pony Grand Prix jumper Spring Brooke as a Dam.

His Dam Lilydale is by Thoroughbred stallion Kings Chapel who has left well performing off-spring on the eventing circuit and is out of Double Cross.

His Sire Canturado competed to 5* Grand Prix and is by Canturo who stood out as a major sire of show jumpers siring the likes of Canturano and Canstakko and also young eventing champion Upsilon. Canturo also competed at the Olympic Games as an 8yr old. Canturado's Dam Kamille II is a full sister of the five Acorado brothers. Acord II her Sire is one of Holsteins most successful stallions and she also boasts Ramiro on her mare line.

His Dam La Chica had a short but successful career under saddle before injury put her to the broodmare paddock, she showed a great trainable nature with three good paces and a correct jump, She is by Thoroughbred Stallion El Hermano out of Righteous Lass.

His Sire Grafenstolz is a very successful Trakehner Stallion who has won Trekehner Stallion of the Year and has also been ranked in the Top 10 Eventing Sires in the World, His Sire Polaroin qualified multiple times for the World Cup Finals and his Dam Gipsy Lady is the full sister to approved stallion Gipsy King and has also mothered several top performers including Gipsy Rose, Grand Passion, Guy Laroche and Grimani. Grafenstolz has made the finals for all three disciplines (Dressage, Show Jumping and Eventing) in the same year and also competed in the World Eventing Championships with Michael Jung. He is a well proven Eventing Sire with his offspring coming home with multiple top honours in the Young Horse Championships in multiple different countries.

His Dam Kiwi Envy is a big scopey mare by Kiwi Gold who is by Golden Gamble who goes back to Witzbold one of the most successful warmblood show jumping sires in NZ History. The same sire lines as Champion European Show Jumper and Sire Darco. Golden Gamble's dam Rose Keith was a Grade B Show Jumper and full sister to international Grand Prix Winner Rifleman (NZ HOY Winner 1973). Kiwi Gold's Dam Cherokee was an A Grade SJ who represented NZ and is also the mother of Reservation who went to the Olympics and was 2nd in the richest class in the world at the time the 'Du Maurier' at Spruce Meadows competing against the likes of Milton, Egano and Jappeloup. Kiwi Gold has been the Sire of international Grand Prix jumpers and National Title Winners and his daughters have also produced National Title Winners. Kiwi Envy is out of a Thoroughbred mare called Frankie who was by Lan Franco who has been the sire of World Cup Jumpers.

His Sire LV Midge is a young stallion who's trainability is second to none with three amazing big and elastic paces and a correct scopey jump. His Sire FIS Santo is by Sandreo who goes back to Santro Hit on the Sire Line and Anamour on the Dam Side and his Dam LV Larnie has successfully competed across the disciplines and is by Landro L who goes back to Landgraf I and is out of Thoroughbred mare Skypro.

His Dam Indy is by Colour Me Cool who is a Gisborne Bred Stallion that was a fun and versatile all rounder who competed to 1.25m Show Jumping, Qualified for SH at HOY in one show and was a multi champion Pinto Inhand. Her Dam was a Thoroughbred called Misty Blue who was by Musical Phantasy out of La Misty who was by Head Hunter.

His Sire Galaxy Spring Fever is an excellent producer of performance ponies and comes from well known and proven lines with Galaxy Pourewa as a dad and Pony Grand Prix jumper Spring Brooke as a Dam.

His Dam Lilydale is by Thoroughbred stallion Kings Chapel who has left well performing off-spring on the eventing circuit and is out of Double Cross.

His Sire Golden Strike is successfully competing under saddle in both Dressage and Jumping and is by Golden Atreju out of the state premium mare Leni who is by Lucky Strike. His pedigree is full of outstanding German Riding Ponies that have competed successfully internationally.

His Dam La Chica had a short but successful career under saddle before injury put her to the broodmare paddock, she showed a great trainable nature with three good paces and a correct jump, She is by Thoroughbred Stallion El Hermano out of Righteous Lass. 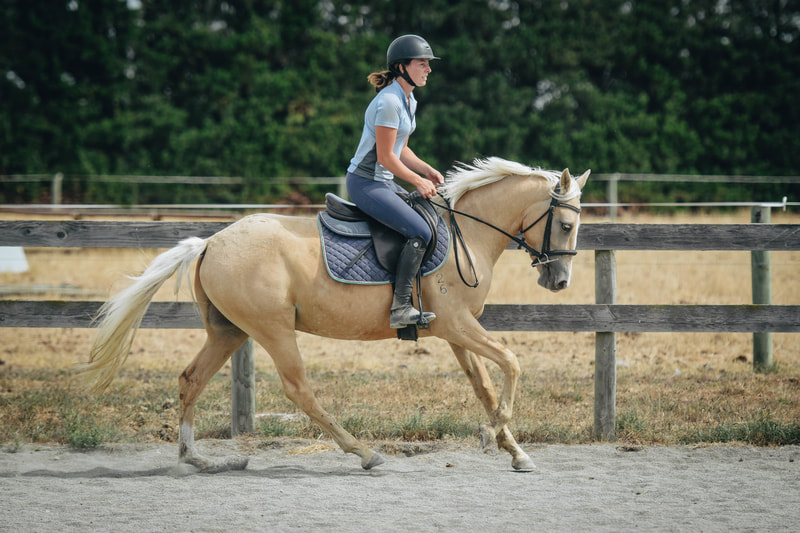 His Sire Royaldik is by Royal Diamond who is a son of of the legendary stallion Rubinstein and out of Herka who is the full sister to Heraldik who competed to 1.50m level. Royaldik himself was the winner of the German Stallion Test and is known for leaving rideable modern types with expressive paces who are excelling on the eventing scene.

His Dam Abbey was showing plenty of promise under saddle before an injury forced her to the broodmare paddock. She was by the super Thoroughbred stallion Yamanin Vital who goes back to Sir Tristram and has level many upper level horses and out of Bold Esmae.

20/12/2014 - 15.2hh Mare by Lansing out of Zara. Poppy was started under saddle as a 3yr old and lightly ridden and competed as a 4yr old before a paddock accident forced the decision to put her in the broodmare paddock. Under saddle she showed plenty of promise with a correct scopey jump.

Her Sire Lansing was approved and licensed with the Holsteiner Verband, Oldenburg Verband and KWPN. Lansing is by super sire Landgraf and out of Monoline who also sired Calvin Z and Cantus who have both left top level offspring as well.

Her Dam Zara is by Token Romance who is by super NZ Sport Horse Pintado Desperado that has left many versatile horses that have competed up the levels and is out of an Stationbred x TB mare called Zoeys Way who competed with success herself.

11/2/15 - 16.2hh Mare by Thomas RF out of Little Marge. Started lightly under saddle as a 3yr old before coming back into work as a 4yr old. A nice straight forward mare with good paces and a cute jump. Sold to Brianna Bailey December 2018 as a 4yr old.

Her Sire Thomas RF competed to Pony Grand Prix himself and is by the Welsh Pony Stallion Telynau Braveheart out of Dutch Warmblood mare Delilah.

Her Dam Little Marge was by the super versatile stallion Corlando stood by Goldengrove Stud who is by Contango II out of Lamona who have both left numerous top performers and out of Skeoch.